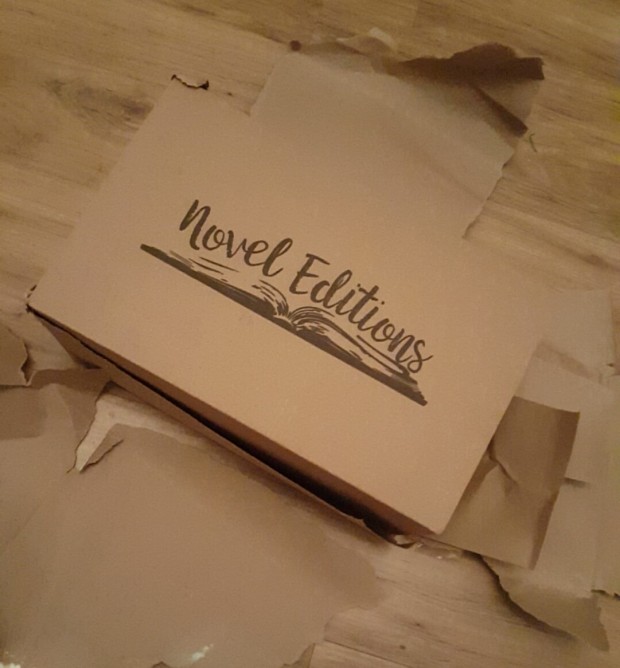 I’ve wanted a monthly book box subscription since I found out they existed, but finding a Canadian one that appealed to me was difficult. There were all kinds of awesome ones, but many were American-based and would have broken my budget after paying for international shipping and currency exchange. A few months ago, though, I found a new book box subscription based out of Toronto that was just beginning: Novel Editions.

I found Novel Editions just before their first box was released in November 2016.  I waited two months to see what kind of items the box would include before signing up, and seriously regret not ordering these babies immediately! The first two boxes were themed “All the Stars” and “Literary Rebels.” Needless to say, the books featured in these boxes (All The Ugly And Wonderful Things by Bryn Greenwood, and The Ballroom by Anna Hope) are now on my TBR list, and I can’t wait to get my hands on them.

After missing out on these two gems, I eagerly purchased a 3-month subscription (January-March 2017). The theme of the January box (which I received one day after it shipped!) was “Enchantment.” Anyone who knows me knows that I love magic, fantasy, and letting my imagination run wild, so this was right up my alley.

When I came home from work a few weeks ago and saw the box on my doorstep, I picked it up, ran inside, and began tearing it open. I also may or may not have snap-chatted the entire process to some of my friends (sorry guys, I was just so excited!).

I had no idea what to expect inside this glorious box. Yes, I was getting a book, but what book? And what bookish items? The suspense!

The first item in the box was a letter from the creator of Novel Editions, which explained this month’s theme. After reading it over, I noticed an intoxicating scent coming from the box. Turns out it was coming from an adorable little bundle that was a Lavender Sleep Sachet by NewMoonTeaCo! Afterwards, I noticed the personalized box containing flowering tea samples from Tealyra (TeaLux), and three different bubble truffles from Northern DLights.

The book was individually wrapped, and buried beneath all of these goodies. My mind was racing: what enchanted-themed book could possibly relate to tea, potpourri, and baths? If you guessed something witchy, you’d be right.

This novel has already received a lot of amazing reviews, so it was already near the top of my TBR list. In fact, since I’m such an avid book fiend, I had already purchased a copy! That’s right: my greatest fear of receiving a book I already owned had finally come true. However, I quickly realized that this is not a problem that a book lover should ever have. In fact, it meant that I could give a copy to a pal, and we could have some hardcore book talks after we both finished it! Plus, Novel Editions has an online book chat every month to discuss the novels in each box, and I realized it would be even more fun to have a friend join in the conversation.

Needless to say, I absolutely loved my first box from Novel Editions, and cannot wait to receive the February box in the mail! The theme of the February box, which is on sale now, is “Nature,” and is going to feature two books by Canadian Aboriginal authors as well as three bookish items. (Serious bonus points to Novel Editions for featuring so many Canadian authors!)

If anyone is looking to treat themselves to some amazing bookish mail, I seriously recommend checking out Novel Editions. The time and love that is put into creating these boxes is incredibly evident, and all of the featured books so far have been amazing.

If anyone is interested in purchasing a subscription to Novel Editions, please feel free to put “Referred by Elizabeth DiCesare” in the “note to sender” section when purchasing.