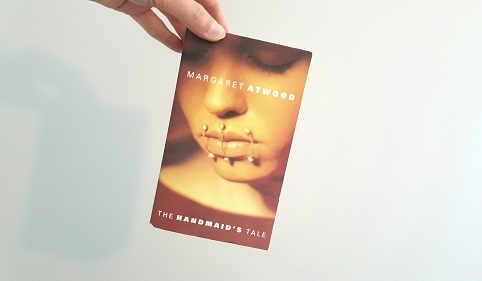 Every bookworm has a stash of books they haven’t gotten around to reading yet, right? I can’t be the only one with this problem. In an effort to make myself more aware of my staggering TBR pile, I’ve decided to dedicate every Thursday moving forward to showcasing a book that I own but haven’t read yet. Please don’t judge me.

I’m a little embarrassed to admit that I’ve never read The Handmaid’s Tale. It’s been on my bookcase for a few years (well before the television series was even announced), and I keep telling myself that I’m going to read it soon, but here I am, putting together my summer reading list, and not including this contemporary classic.

I know, I know! I’m the worst. I do want to read this book, but I also want to read so many other books! Life can be hard, guys. This is why I wish my job title was “Reading Wizard.” Then I could (maybe) read all of the books that are sitting on my shelves at home, plus all the titles I currently have on hold at the library.

You’re probably thinking, “If you want to read this book so badly, why don’t you just read it?” That is a totally fair question. I think the reason I am so hesitant to read The Handmaid’s Tale is because I already know what it’s about. Ever since Hulu picked up the show, tons of my friends have been talking about it, and they’re not very good at keeping spoilers to themselves.

Now, I know that the show/movie isn’t always exactly the same as the book, but plenty of my book-loving friends have also read the book, and told me about it, too. In fact, a few of them have made a point of shaming me (once in public) because I’ve never read it. I’m sorry (again)! But it’s hard to want to read a book when you already know what’s going to happen.

Another reason I’m hesitant to dive into this story is because my friends (and the internet, because let’s be real) have given me ridiculously high expectations of this book, and I’m worried it won’t live up to the craze. I know people have been raving about The Handmaid’s Tale for years, so it must be good, but is it as good as everyone makes it seem?

Am I going to want to rage against the patriarchy more than I already do? Maybe. Am I going to draw way too many parallels about how the story (originally published in 1985) is very similar to events occurring today? Probably. Is it going to have a huge effect on my life? I don’t know.

I do know that I want to read this book one day. I’m just not sure when that day will be. Until then, it will stay on my shelf, and I will continue to quietly admit to people that no, I haven’t read it.

Does anyone else have books at home that they are embarrassed to admit they haven’t read yet? Let me know, because you’re not alone!