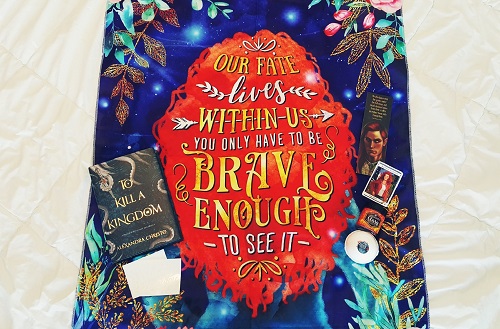 I ordered my first Shelf Love Crate earlier this year, and loved it! My box came back in March, and the theme was Firey Redheads. As a proud ginger and wanna-be Weasley, I just had to have this box!

Growing up, I was always teased for having red hair. I was the only one in my year in elementary school who rocked ginger locks, and one of few throughout high school. I was always the odd one out when it came to hair colour; I was different and weird, and other kids always told me so.

As an adult, though, I love my red hair! It shows that I am unique and fierce. Instead of ridicule, I often get compliments (which is a bit weird after years of teasing, to be honest). But my hair makes me who I am, and I always want to celebrate it with fellow red-heads. The Firey Redheads box helped me do just that!

Now, let’s take a look at what the box included:

The featured book was To Kill a Kingdom, by Alexandra Christo, which also came with a signed book plate. This book is a modern retelling of The Little Mermaid. It features Princess Lira, who is a lethal siren princess. She’s collected the hearts of 17 princes, but after killing a fellow siren, her mother turns her into a human. She is tasked with stealing the heart of a human prince, Prince Elian, and returning it to the Siren Queen. But will she be able to? I’ll have to read to find out! Anything based on The Little Mermaid sounds good to me.

Overall, I was pleased with this box. The items were unique, and followed the overall theme perfectly. Everything was somehow related to a red-headed character, and even though I’m not familiar with all of them, that just means I have more books to add to my TBR pile.

Shelf Love Crate offers monthly boxes for $29.99 USD plus shipping and taxes, which is what I ordered. They also have 3- and 6-month subscriptions for $86.97 USD and $167.94 USD, respectively (shipping and taxes apply to these options as well). I will note that they only include YA books, and cater their additional items to hat audience as well.

However, I recently discovered that they have another box, Shelf Love Reads, which focuses on YA books and items for twenty-something audiences. These boxes cost a little more, but I am eagerly waiting for a theme I like to try one out.

🎵Having fun isn't hard, when you've got a library card🎵 Check out my latest haul from @kitchenerlibrary — too many books, or never enough? I don't know if I'll finish all of these before they're due, but I'll be able to borrow them again for FREE if I don't 💞
🔪Book Review: MY HEART IS A CHAINSAW by Stephen Graham Jones🔪 This was the October #bookclub pick for #ReadWithACoupleReads hosted by @acouplereads 🖤
👻SPOOKY BOOK MAIL from @tornightfire 👻
Who's more excited about new books, me or @corporal_sausage 😅 I picked up these two @tordotcompub novellas from @wordsworthbooks today after work and I'm so excited for them both!
Loading Comments...
%d bloggers like this: