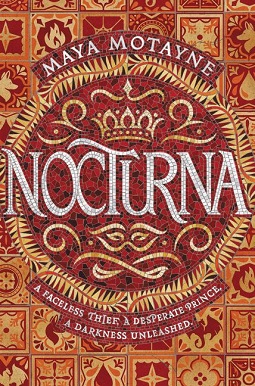 “Magic was a mask Finn had slipped over her head so many times, she’d almost forgotten what her own face looked like. But that was just how she liked it.”

I first heard about Maya Motayne’s debut novel, Nocturna, when I attended the HCC Frenzy Spring Preview back in February, and was overjoyed when I found it in my swag bag at the end of the event. This book, which is the author’s first novel, is described as a Latinx-inspired fantasy.

The story takes place in the magical kingdom of San Cristobal, and centers around a prince and a thief who are trying to stop black magic from spreading. Aflie (the prince) and Finn (the thief) don’t really know each other, but they have to work together in order to save their world.

In this world, which is based on the author’s Dominican heritage, magic exists in a general sense, but each individual also has their own specific type of magic, called a propio (which is Spanish for “own”). This is the magical ability that allows Finn to change her appearance at will (similar to Ayra Stark from Game of Thrones). It’s different for everyone, and makes the concept of magic in this story very personal, and unlike anything I’ve read before.

This story is absolutely incredible. The take on magic is fresh, the culture ingrained in the characters and setting is wonderful to read, and the writing is quick but meaningful. You won’t find a lot of romance in Nocturna, which is also a nice break from a lot of YA fantasy, but if you love action scenes (I know I do), you’ll feel right at home in this story.

The best way I can explain how amazing Nocturna is is by telling the story of how I read it. I was in Paris, which is a city I had been planning on visiting since I was in university (I studied early modern French history). One morning, I decided to read during breakfast, and then spent the entire afternoon in a park right under the Eiffel Tower reading. I told my friend who was with me that he could go wander around as much as he wanted, but I had to see the story through. It had me totally encapsulated, and even my dream vacation couldn’t keep me from reading. 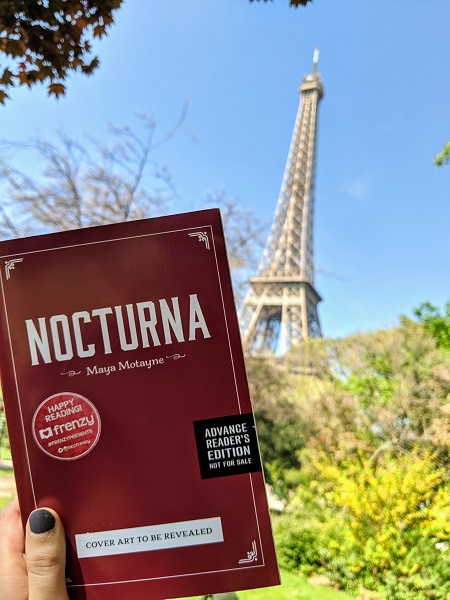 I’m not kidding. I sat with my ARC for almost three hours and refused to leave.

If you’re a fan of YA fantasy novels, or magic in general, you should get your hands on a copy of this book right now! I would also recommend this book for fans of Victoria Schwab, as the general story is similar to her Shades of Magic series.

Thank you to Harper Collins Canada for sending me a copy of this book in exchange for an honest review. Nocturna was released on May 7, 2019, and is available wherever books are sold.

Book Review: CLOWN IN A CORNFIELD 2: FRENDO LIVES by Adam Cesare🤡🌽🔪
🏹 I can't go on a vacation without buying at least one book, and as soon as I saw this special edition of THE SONG OF ACHILLES in Florence, I knew it had to come home with me 💙 I haven't read it yet but have heard nothing but incredible things.
🫒 Does a bookstagrammer even go on vacation if they don't stop by at least one bookstore?
🍄Book Review: WHAT MOVES THE DEAD by T. Kingfisher🍄
Loading Comments...
%d bloggers like this: