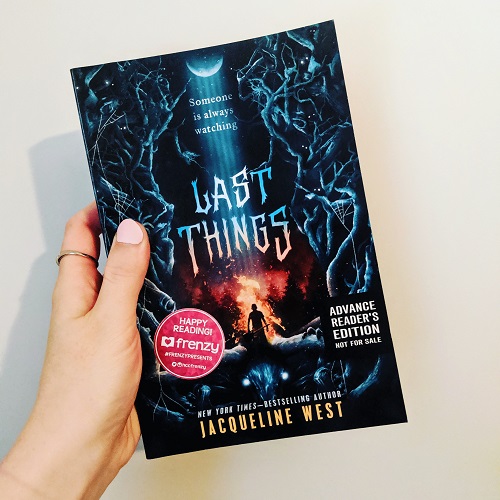 “I can see the dark things. They’re trying to hide, but I can spot them, hunched behind corners, pressed against walls. Shadows where there is no one to cast shadows. Nobody’s shadow would look like that anyway. Warped. Bony. Bent almost like branches. They are waiting. I can feel them. And they can feel me pushing back.”

There something strange happening in the forest around Greenwood, but everyone is too obsessed with a local band, named Last Things, to really notice.  That is, everyone except Thea Malcom. She knows something isn’t quite right, but is keeping her secrets all to herself.

Anyone following my blog, or those following me on Instagram, might know that I love reading horror in the Fall. There’s just something about getting cozy with a spooky book when the daylight starts running out, and the leaves turn crisp and colourful. I usually save up all my creepy stories for when October rolls around, but when I heard about Last Things, I couldn’t wait.

This story is told from two different points of view. First, we have Thea. She’s the niece of a local woman who many believe to be a witch. Thea attends the town high school, but doesn’t really interact with people. She’s a seemingly huge fan of the local band, to the point where many people joke that she is stalking the lead singer, Anders.

Anders provides the second point of view for this story. Yes, he’s the lead singer of Last Things, but he’s also the lead guitarist and song-writer, and an incredibly gifted one at that. However, he doesn’t think he deserves his talent, and has a “nobody understands me” attitude. He’s mysterious, yes, but not just because he’s an angsty teenager.

So you have a strange girl, an unusually gifted musician, and a setting that involves a creepy forest. If you’re thinking Stranger Things vibes, you’re absolutely right. If you want a similar book comparison, look no further than V. E. Schwab’s Monsters of Verity duology.

There is something dark and dangerous in the woods, and it is most definitely related to the metal music that Anders is writing and performing for Last Things. Thea knows what’s happening, but can’t tell anyone; it’s too risky.

How is it all related? Will this small town be safe? You’ll have to get a copy of Last Things and find out for yourself!

While this book is YA, it doesn’t disappoint. It’s spooky, but not over the top. There’s teenage romance, but it’s bearable. And most importantly, the story is strange enough to keep you flipping pages until the very end. If you’re into supernatural horror, you won’t want to miss this one.

Thank you to Harper Collins Canada for sending me a copy of this book in exchange for an honest review. Last Things was released on May 7, 2019, and is available wherever books are sold.

Book Review: CLOWN IN A CORNFIELD 2: FRENDO LIVES by Adam Cesare🤡🌽🔪
🏹 I can't go on a vacation without buying at least one book, and as soon as I saw this special edition of THE SONG OF ACHILLES in Florence, I knew it had to come home with me 💙 I haven't read it yet but have heard nothing but incredible things.
🫒 Does a bookstagrammer even go on vacation if they don't stop by at least one bookstore?
🍄Book Review: WHAT MOVES THE DEAD by T. Kingfisher🍄
Loading Comments...
%d bloggers like this: