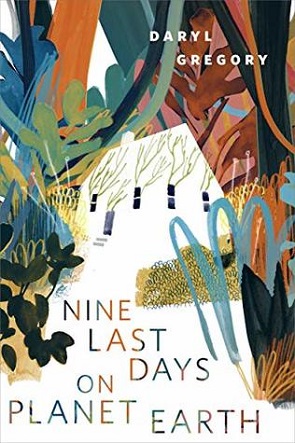 “When the seeds rained down from deep space, it may have been the first stage of an alien invasion—or something else entirely.”

In need of some sci-fi but don’t have the time to commit to a thick book full of world-building and character development? Have no fear, because Nine Last Days on Planet Earth has both of those things, and packs it all into a gut-punching 42 pages. That’s right, this short story is absolutely incredible.

Nine Last Days on Planet Earth by Daryl Gregory packs such a huge punch that I don’t even know where to start with it. It wasn’t at all what I was expecting, yet ended up even better than I hoped.

Science fiction is easily one of my favourite genres, and vignettes are one of my favourite writing styles. You don’t often see the two together, which is why I think this short story caught me so off-guard. The backdrop focuses on an alien invasion (plants, not creatures), but the plot is driven by one character, LT.

Each chapter (there are nine, a subtle reference to the title) focuses on a different snapshot of LT’s life, with the alien plants always present, albeit in the background.

The first chapter shows us the meteor shower that brought the alien seeds to Earth, which happened when LT was a young boy. This event was also the last time he and his parents were all in his childhood home together. The final chapter ends with LT celebrating his 97 birthday with friends and family, for what is likely the last time.

Between these chapters we see how LT grew up, attended college, became a well-respected and renowned researcher (specializing in studying the alien plants), fall in love, get married, adopt children, deal with a homophobic father, and make important discoveries that help humans and native species co-exist with the plants from space. One plant in particular, a human-looking tree called Mo, follows LT throughout most of the story. It’s a beautiful and inspiring relationship, and added another layer to the story.

This story might be short, but it’s beautifully written and covers a lifetime of vital moments in only a few pages. If you’re looking for a short story that contains elements of science fiction, do yourself a favor and read it. I purchased a digital copy on my Kobo, but it’s also available for free on Tor’s website.