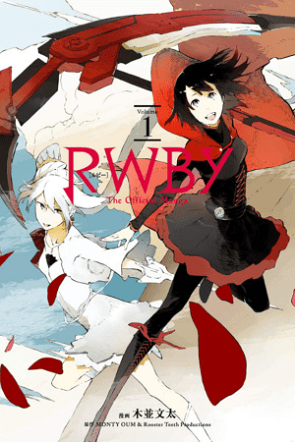 Today I sat down and read RWBY: The Official Manga, Vol. 1 and it was incredible. This is another series that I have watched (I think I’ve seen the first three seasons?), so I was super excited to experience the story in a new format. This one is a little different though, because RWBY was a TV show first, created by Rooster Teeth. That’s right, the show came out before the book!

This story centers around four main characters: Ruby Rose, Weiss Schnee, Blake Belladonna, and Yang Xiao Long (hence the acronym RWBY; it’s all of their first initials). The four girls are studying at Beacon Academy to become Huntresses, and fight off Grim that try to destroy human civilization. What are Grimm? They’re a kind of supernatural monster that live in Remnant (the name of this story’s world) and feed off of sadness and despair. They’re responsible for destroying many towns and cities, and killing humans.

All four girls enroll at Beacon because they want to use their abilities to fight Grimm and protect humans. Throughout the first volume, we learn about their individual abilities, how they work, and some of the specialized weapons that they use. All of this is built upon and expanded throughout the show, so I can only assume the manga will eventually go into more detail as well.

Of course, there’s more than just Grimm that Huntresses and Hunters fight. Organized crime is very much alive in Remnant, and we see some of it teased in the first volume as well. Suffice to say, Ruby and her team have a lot of things to deal with, and their first-year school training is only the beginning.

One of the things I loved most about RWBY: The Official Manga, Vol. 1 was the art. I wasn’t sure what to expect, but assumed it would be different from the art style used in the show (which was created by an American company). The art in the manga is stunning, and when I looked up some full color pages I nearly cried. It’s one of the most beautifully drawn series I’ve seen in a while. Even the Grimm look good.

If you’re looking for a new manga to check out, and want strong female characters, or a bit of a supernatural twist, then check out RWBY.

Thank you to the publisher, VIZ Media, for an electronic copy of this book via NetGalley. RWBY: The Official Manga, Vol. 1 comes out on August 19, 2020, and can be pre-ordered or purchased wherever books are sold.