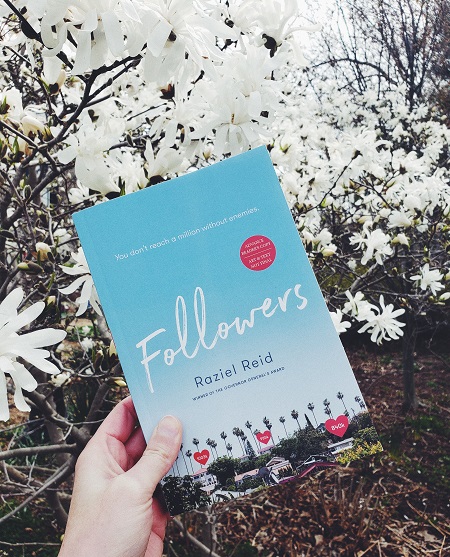 In April I put together a list of books to read if you love reality TV, and I wish I waited to put it together because Followers by Raziel Reid is perfect for fans of the Kardashians, any of the “Real Housewives” series, or teen dramas such as Gossip Girl or The O.C. I devoured this book, and it left me reeling.

The story follows Lily Rhode, a sixteen-year-old who is arrested when her date decides to commit a break and enter. Her mom ends up sending her to her aunt’s house, where she supposed to spend the summer living in the pool house (if this doesn’t scream The O.C. to you, there are plenty of other references that will).

This doesn’t sound too bad, right? Well, the catch is that her aunt, Whitney Paley, is one of the stars of the hit reality show Platinum Triangle, and Lily’s mom also signed Lily up for a minor role on the show.

Sure, to some this might sound great, but Lily doesn’t know anything about being famous. Her and her mom are distanced from the glamour and glitz of their family, and Lily doesn’t even have any social media accounts. Her cousin, Hailey, has over one million followers, and plays the role of teen queen on the show. She might seem sweet on the outside, but has her own vile games that she plays with the other teenage co-stars.

Throughout the story we see Lily integrate into this very public lifestyle, and watch as her presence upends the relationships others on the show have. Secrets are revealed, and it becomes obvious that what is presented to the public isn’t always the same as what happens in real life. It’s full of backstabbing, deceit, lies, and more than enough drama.

A lot of the events that lead to very shocking moments should come with content warnings: drug use, eating disorders, transphobia, animal abuse, self harm, and an older man preying on and having a truly disgusting relationship with a minor. Many of these themes are very real examples of what have been present in real life tabloids and news stories.

The only part of the book that I didn’t care for were the comments at the beginning of each chapter. Each chapter, told from the perspective of a different character, starts with comments from their social media accounts. I don’t like reading comments in real life, so I skipped these.

Reading Followers was truly a rollercoaster for me. There were times when I wanted to throw the book across my room, and others when I wanted to reach out and hug certain characters. The range of emotion it made me feel was unreal. If you’re a fan of reality TV, I’m sure you’ll enjoy this book too.

Thank you to Penguin Random House Canada for a copy of this book in exchange for an honest review. Followers by Raziel Reid came out on June 9, 2020, and can be purchased wherever books are sold.