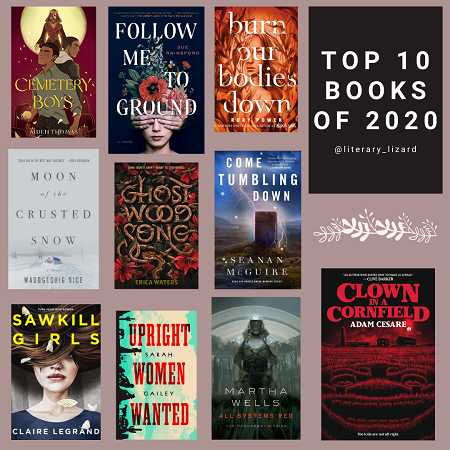 Who wants another Top 10 list of 2020? No one? Cool, I made one for all the best books I read this year anyway!

If my 100 One-Line Book Reviews post was too long for you (honestly, it was too long for me too, so I don’t blame you) maybe this one will be more enjoyable. I’ll keep it short and sweet, but if you’re looking for some book recommendations for 2021, these are, in my opinion, a good place to start—especially of you like horror, speculative fiction, and LGBTQ characters.

END_OF_DOCUMENT_TOKEN_TO_BE_REPLACED 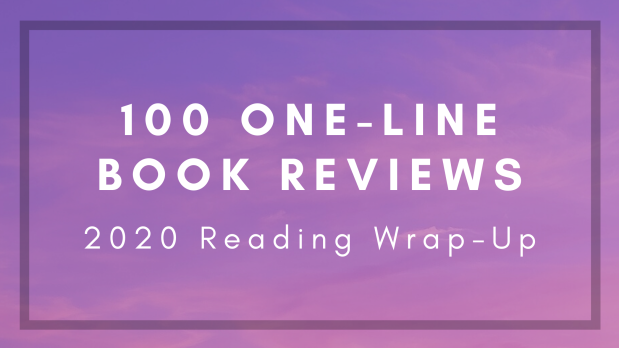 Now that 2020 is nearly over (!!!!!!!!) it’s time for my annual reading wrap-up! I’ve always challenged myself to write one-line reviews* of books I’ve read throughout the year, and am continuing the tradition this year as well.

I had originally set myself a goal to read 52 books this year, but thanks to lockdown, I hit that pretty early. Then, I upped my reading goal to 100 books, and have since surpassed that as well. However, for the sake of my sanity (or at least what’s left of it), instead of writing a one-line review for every book I’ve read this year, I’m sticking to the first 100.

If you’re interested in seeing every single book I’ve read in 2020, feel free to check out my Goodreads. Otherwise, feast your eyes on the following 100 one-line book reviews.

And remember, I am writing most of these reviews months after finishing the books, so they aren’t necessarily good, but they are fun! (Get ready for the run-on sentences!)

*These reviews are more like the first thought that pops into my head when I think back to each book.

END_OF_DOCUMENT_TOKEN_TO_BE_REPLACED 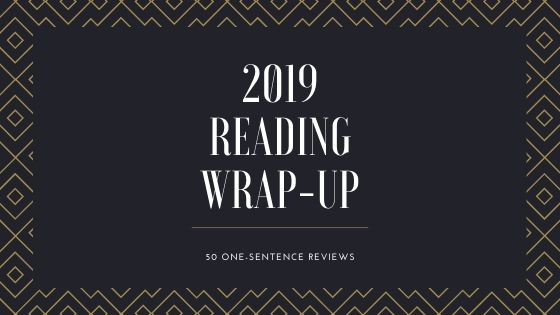 It’s the most wonderful time of the year: that moment when I realize I’ve completed my annual reading challenge! This year I challenged myself to read 50 new books, and as of right now, I’ve successfully read 56. For those of you who have been following my blog for a while, you know this means it’s time for my one-sentence reviews.

END_OF_DOCUMENT_TOKEN_TO_BE_REPLACED 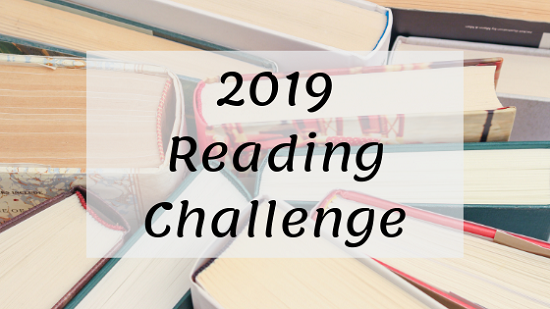 It’s the first day of 2019, and the first thing I did when I got out of bed this morning was grab a new book to start reading. This isn’t all that different from how I start most days, but once I read a couple chapters, I realized that I hadn’t set any reading goals for 2019 yet. So, here we go!

END_OF_DOCUMENT_TOKEN_TO_BE_REPLACED 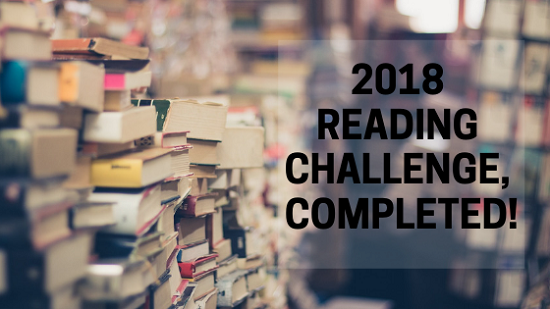 I finally finished my 2018 reading challenge, which means it’s time for my one-line book reviews!

END_OF_DOCUMENT_TOKEN_TO_BE_REPLACED 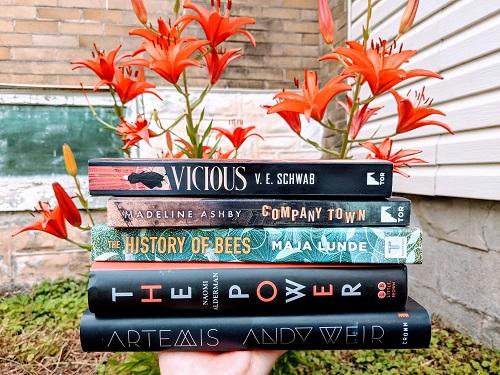 July is finally here, which means it’s time to kick off my summer reading! I know it’s felt like summer for a few weeks already, but to me, summer will always be July and August; it’s one of those things from being a student that I just can’t shake. And making summer reading lists has always been something I’ve loved doing.

END_OF_DOCUMENT_TOKEN_TO_BE_REPLACED 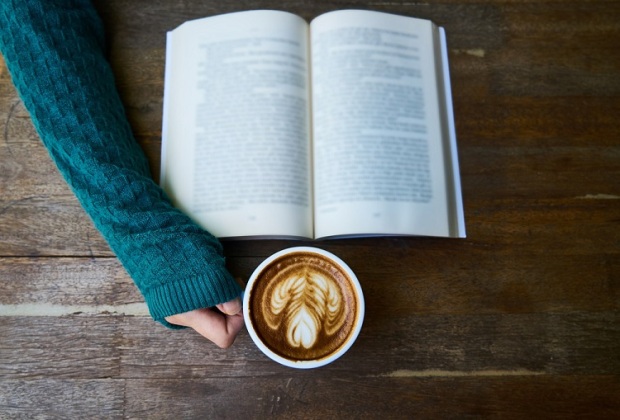 Since there’s only one day left in 2017, it’s time to sit down and plan out my 2018 Reading Challenge goals!

END_OF_DOCUMENT_TOKEN_TO_BE_REPLACED 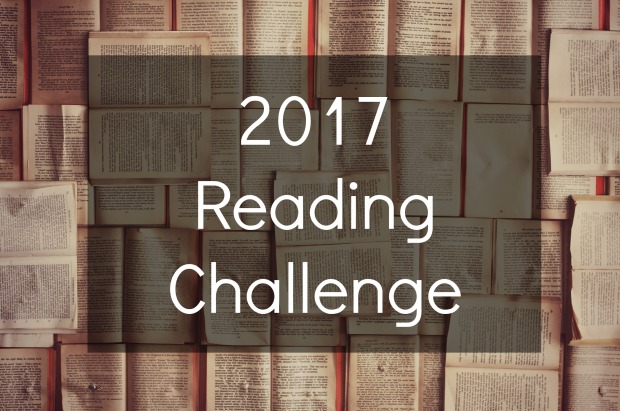 I did it, friends! I successfully completed my 2017 Reading Challenge on Goodreads! This year I challenged myself to read 35 new books, and finished in record time. I didn’t think I could do it, but here we are again. Now, for the third year in a row, I’m going to challenge myself to write one-sentence reviews all of 35 new books I read (so far) this year! I can’t promise that these will be well-written sentences, but if you’re looking for something new to read this Fall, check out my list below. And if something catches your eye but my one-liner doesn’t convince you to check it out, let me know and I can give you a full review.

END_OF_DOCUMENT_TOKEN_TO_BE_REPLACED 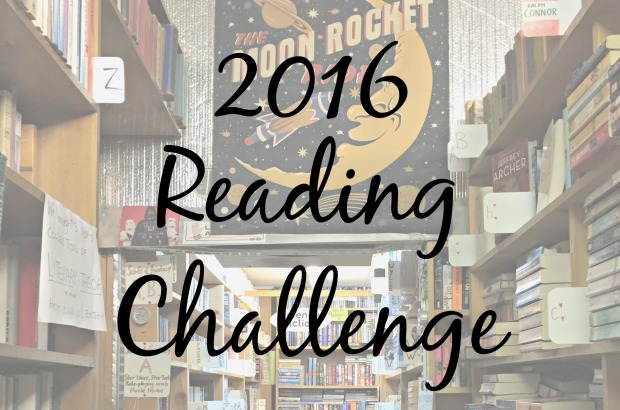 This year I challenged myself to read more new books than ever before. I was worried I wouldn’t have time to achieve this goal, but I surprised myself. I was able to read 30 new books before Halloween! Now my Goodreads account is congratulating me.

I’m going to once again challenge myself to write one sentence reviews of each book, so if you’re looking for some new literary adventures to finish your year off check out what I’ve read in the past ten months.

END_OF_DOCUMENT_TOKEN_TO_BE_REPLACED

This year I challenged myself to read 25 new books, and kept track of my progress through my Goodreads account. I am proud to say that as of last week, I successfully completed this challenge! Now I can spend my December re-reading some of my all-time favourites (I’m coming for you again, Gatsby!).

Today, I decided to re-visit all the books I read this past year, and challenged myself to write one-sentence reviews. If you’re looking for some new reads to wrap up your year, check these out!

Written by a Toronto-based doctor about being a medical student in Toronto: this book gives you more insight into the world of medical care than Grey’s Anatomy ever could.

Not That Kind of Girl, by Lena Dunham

While some excerpts were great, others weren’t, so I defiantly wouldn’t say that it defines a generation.

I don’t even know how to begin explaining my love for Clarke’s work, or 2001: he spins a masterful tale about life on Earth and beyond.

The Bell Jar, by Sylvia Plath

This book is full of female, twenty-something angst, and I love it; funny and sad, Plath will welcome you into her world and make you feel at home.

Hemingway makes me feel in a way that no other author can, and this book is no exception; I don’t even know how to describe it except by saying “it’s real.”

A Dance With Dragons, by George R. R. Martin

I still hate all the Starks.

I really don’t understand the hype around this book — it was only alright.

A Long Way Down, by Nick Hornby

Another book full of angst, but also ripe with strange friendships that develop over a pact to not commit suicide.

You never know what you’re going to find in space!

Into The Wild, by Jon Krakauer

One of the greatest pieces of non-fiction I’ve ever read, and a compelling story about one young man’s journey to find himself.

Rosencrantz and Guildenstern Are Dead, by Tom Stoppard

If you want to know what the character’s in Shakespeare’s Hamlet do while off-stage, read this play, because it’s hilarious.

The War of the Worlds, by H. G. Wells

Martians that can’t cope with Earth’s atmosphere or various diseases, so despite their invasion, humans still come out as victors.

Area X is full of secrets that will drive you mad, potentially to the point of death.

This book is full of totally awesome nerdy references, but the ending falls short.

Breakfast of Champions, by Kurt Vonnegut

This book made me pretty uncomfortable, but that’s what Chuck Palahniuk does, so I’d still call it a success.

The Love Affairs of Nathaniel P., by Adelle Waldman

The Night Circus, by Erin Morgenstern

This book tells the story of a wonderful world of magic, but tries too hard to make a sub-par romance spark.

The Legend of Sleepy Hollow, by Washington Irving

I’m still concerned about what actually happened to Ichabod Crane.

The Graveyard Book, by Neil Gaiman

This story will melt your heart in a spooky way.

The story is gripping, and will leave you turning pages and trying to figure out what is happening, but in the end, you’ll be let down.

A Study in Scarlett, by Arthur Conan Doyle

Sherlock and Watson meet for the first time and it’s hilarious.

Fans of the Impossible Life, by Kate Scelsa

Very similar to The Perks of Being a Wallflower, and would have probably been better if I was still 16.

This is the only photo I snapped of Even Though I Knew The End before I had to bring it back to the library, and holy hell, I wish I spent more time staring at the stunning cover 🥰✨
Me all excited to read my next book vs. Me when we find out this dragon has TWO 🍆🍆
🍄Looking for some FUNGAL FICTION recs? If you've been enjoying #thelastofus and want more creepy stories featuring mushrooms, add The Marigold by Andrew F. Sullivan to your list! This title releases in a couple months and it sounds incredible (synopsis below!).
I've had absolutely zero motivation to post reviews lately, but here's a spooky middle grade novel I read earlier this month and absolutely loved 👻✨
Loading Comments...